TL;DR
The GR2 is worth the money if you're looking for a tough and versatile "buy it for life" bag.
Build Quality
10
Layout
10
Compartments
10
Style
8.5
Comfort
8
Extra Features
9.5
The Good
Ultra durable materials
Built in USA
Rainproof
TSA Compliant
Timeless/minimalist style
The Bad
Militaristic-styling not for everyone
It's a heavy puppy - 4.35 lbs
Very expensive, retails at $395
9.3
Final Rating
Get It
GORUCK

GORUCK isn’t quite a household name, but it is very well known in the backpacking community. The founder’s story is well worth the read but if I had to boil it down (which is a shame, you should really check it out!), the founder is a US Veteran that said this of his early aspirations for designing a bag in 2008 –

What lived on was the idea for a bag that you could use in Baghdad or New York City, that would be tough enough for Special Forces, but that I could use in NYC without looking like I was still in the military.

Slowly but surely the GORUCK brand gained a following as an ultra high-quality backpack brand that you could truly “buy it for life”.

It’s worth mentioning now that most GORUCK bags range from $265-400, and the GR2 that I will be reviewing retails for $395 (which I paid). These bags aren’t expensive for the fun of it though, they are truly top quality, battle tested, and made in America. While the price point isn’t for everyone, I don’t think anyone who buys one of these bags will feel cheated on quality.

Let’s take a look at the GORUCK GR2, in my estimation the most popular bag from GORUCK, to see if it really whips the llama’s ass.

The GR2 has a militaristic-style to it which could be a turn off to a lot of people. Some colors have more of a military feel than others, so there is that option if you want to something that looks more civilian, or if militaristic is your niche they do offer a camo pattern in the 40L model of the GR2.

Personally, as someone who has never served in the military I try to avoid looking some type of impersonator or impostor,  so military styles are something I typically avoid. With the GR2 however, I feel that the bag pulls back just enough that I don’t feel self-conscious or militaristic wearing it, so it ends up not being a negative for me.

Maybe it helps that I added a goofy “Stay Classy” velcro patch on the standard velcro pad at the top of the bag. 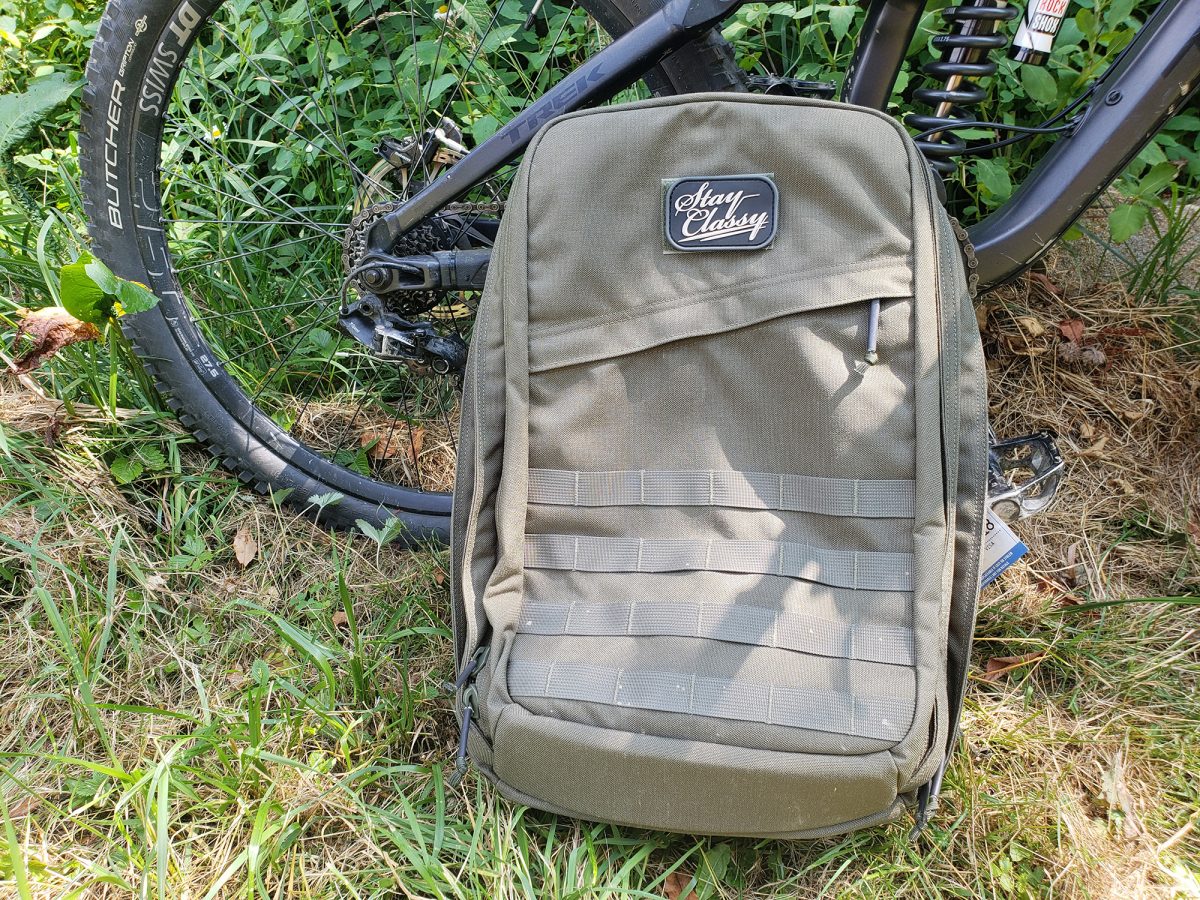 Style-wise, everything on this bag works really well together. Everything is muted and monochrome. The 1000D Cordura nylon used as the main fabric feels exactly how the bag looks – rugged.

Even smaller choices like having “silent zipper pulls” instead of standard metal pulls adds to the spirit of it. It feels dumb to type out, but this bag just feels like it has a personality of rugged authenticity. The GR2 looks like it has a story to tell, even when brand new.

I would also argue that this bag’s style is timeless. Many bags today are chasing trends or use bombastic colors to draw attention. I’d much prefer a bag that will never go out of style when spending so much. 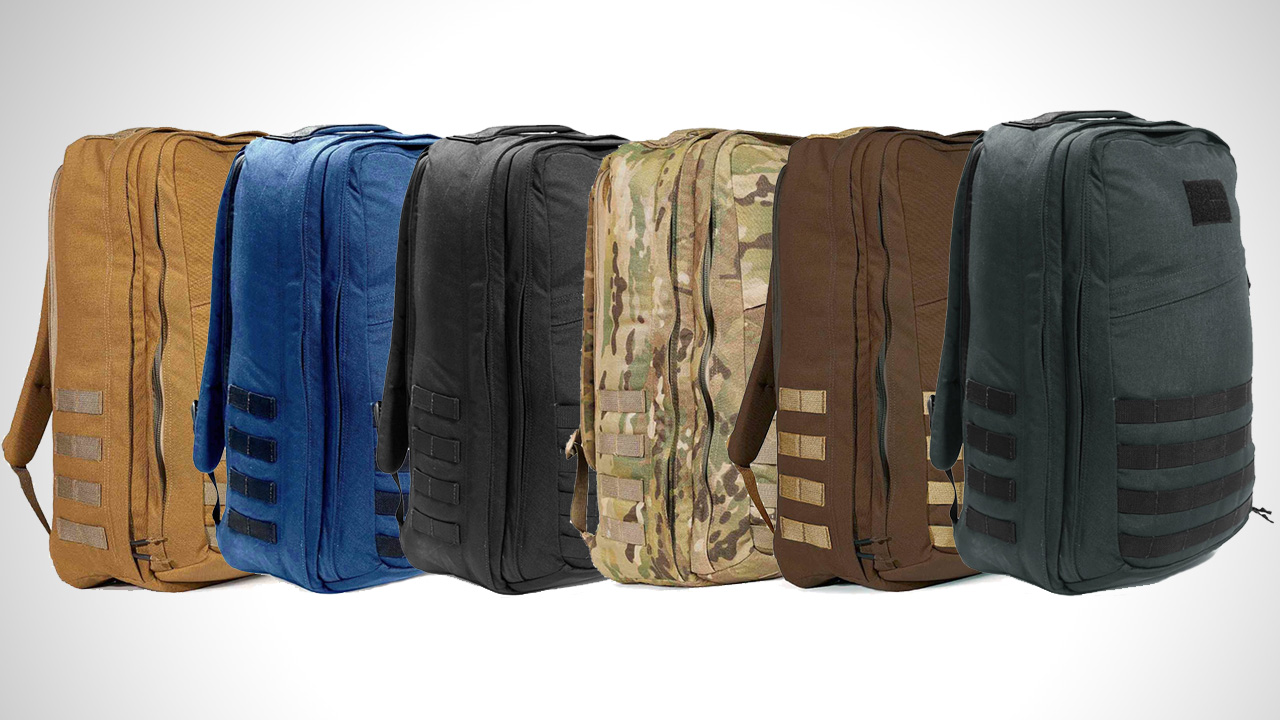 The GR2 is currently available in 6 different colors that offer you a lot of variety while still remaining masculine/rugged throughout. From left to right pictured above, we have Coyote Brown, Navy Blue, Black, Multicam, Java (to honor the founder’s late chocolate lab by the same name), and steel.

The color I’m reviewing is called “Ranger Green”. GORUCK said they’re constantly swapping out the colors they have available and there’s never a guarantee any color will come back in stock other than Black. If you got your heart set on a color that’s not listed on their site, you might be SOL but I would contact their support team before you go with something else. 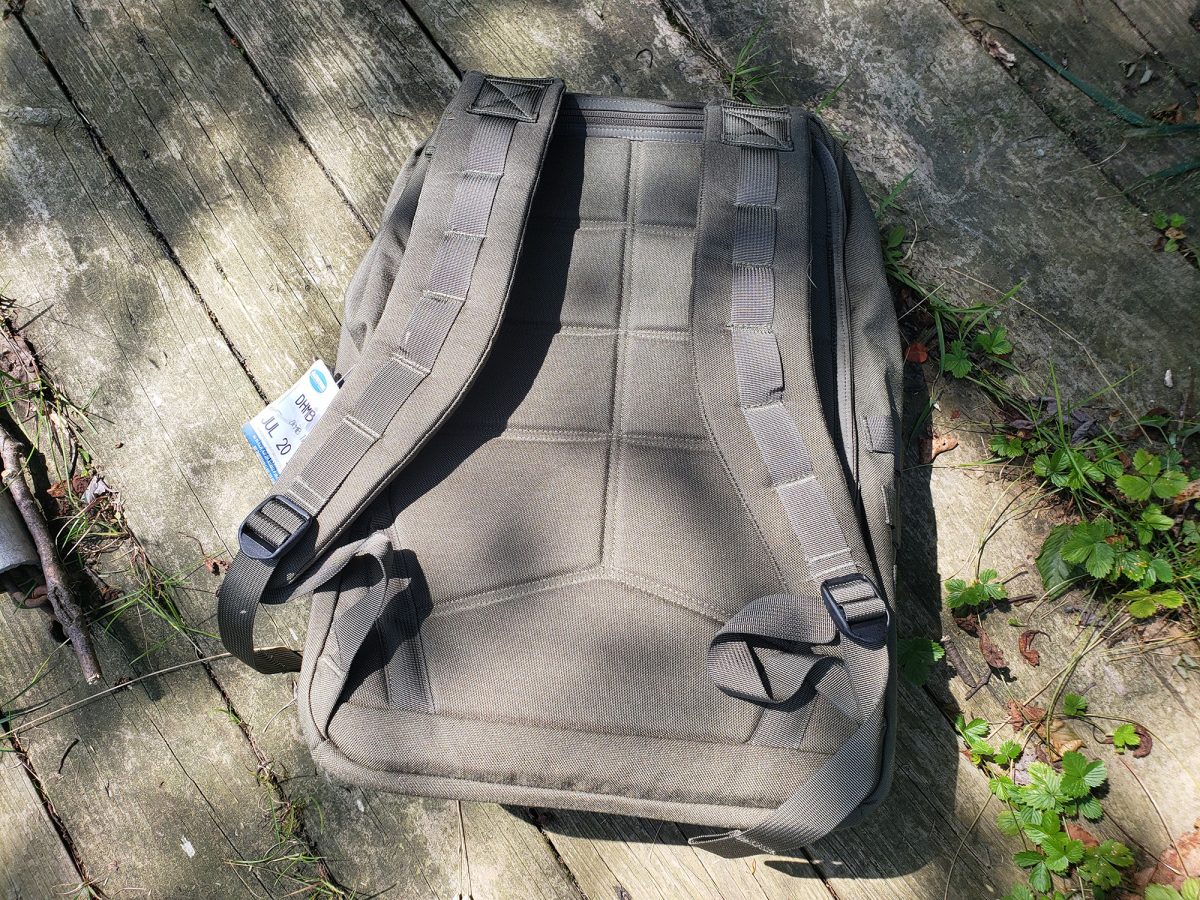 I found the GR2 sufficiently comfortable to wear, but it’s certainly not the most comfortable backpack I’ve ever donned. The back of the bag an internal plastic plate (removable) which helps it keep its flat form, and shallow channels for airflow cross over it to help keep your back cool.

Built with durability-first in mind, the straps are made of the same rugged nylon as the rest of the bag and offers somewhat minimal, though not lacking, padding. One downside I found with the GR2 is that these straps can really irritate your neck if they rub against your skin, so I often found myself trying to wear the straps wide in order to avoid it.

Then again, part of the whole GORUCK culture is to go “rucking” –  loading up your bag with heavy weight and walk for miles as a form of exercise, so it’s very likely that

I have a few trips coming up where I’ll be extensively using the GR2, so I’ll be back in the future with an update as to my findings. 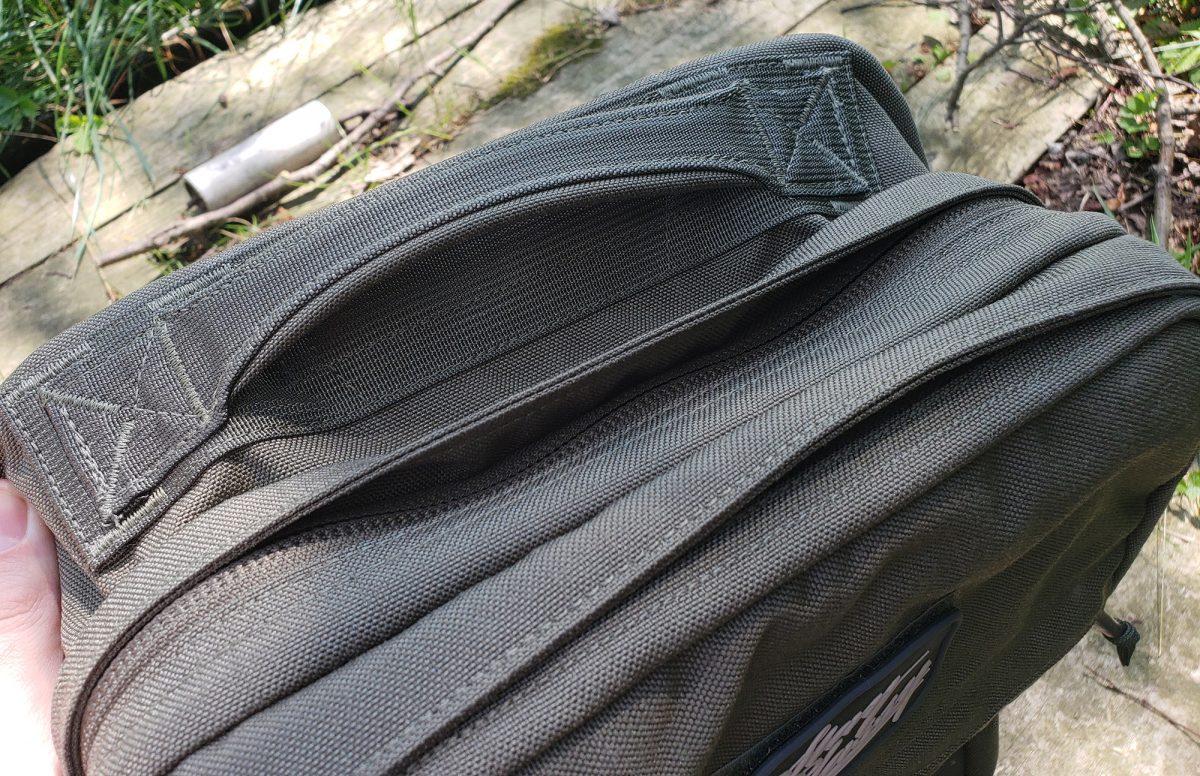 Another way to toss around this bag is by the top handle. This bad boy is heavily reinforced and sufficiently wide/padded; it feels great to use.

Another big sticking point for some people with this bag will be the weight of it. Weighing in at 4.35 lbs, this clearly isn’t a bag for anyone in the ultralite crowd. That’s the price you pay for rugged durability, but for some that price will be too much.

When I bought the GR2, I expected a lot from it in terms of build quality and durability. What I didn’t expect was that it would also be one of the most well designed bags I’ve tried as well.

Started with the outside, you have 4 rows of molle attachments on both sides of the bag and the front. These can be used to attach carabiners, water bottles, a bike lock, and whatever else you might need to strap on to a bag. These largely give the bag its military feel. 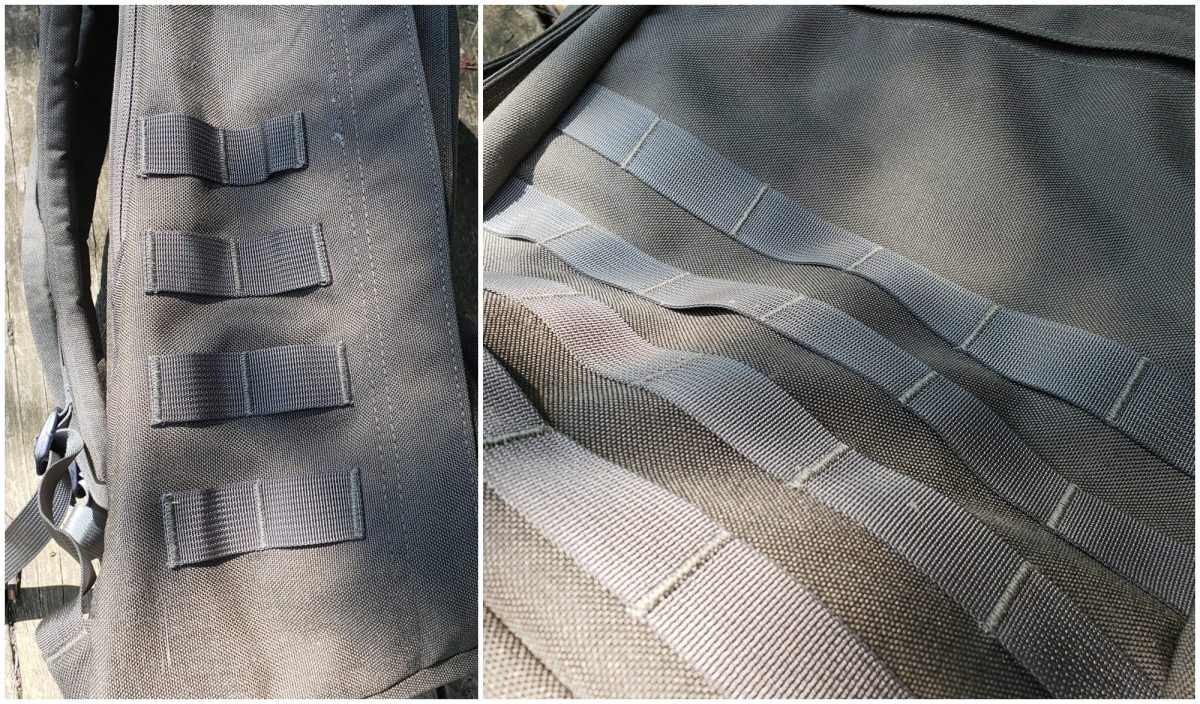 There’s an angled zipper that hides a narrow pouch on the front of the pack with a heavy flap covering it. Did I mention this bag is rainproof? 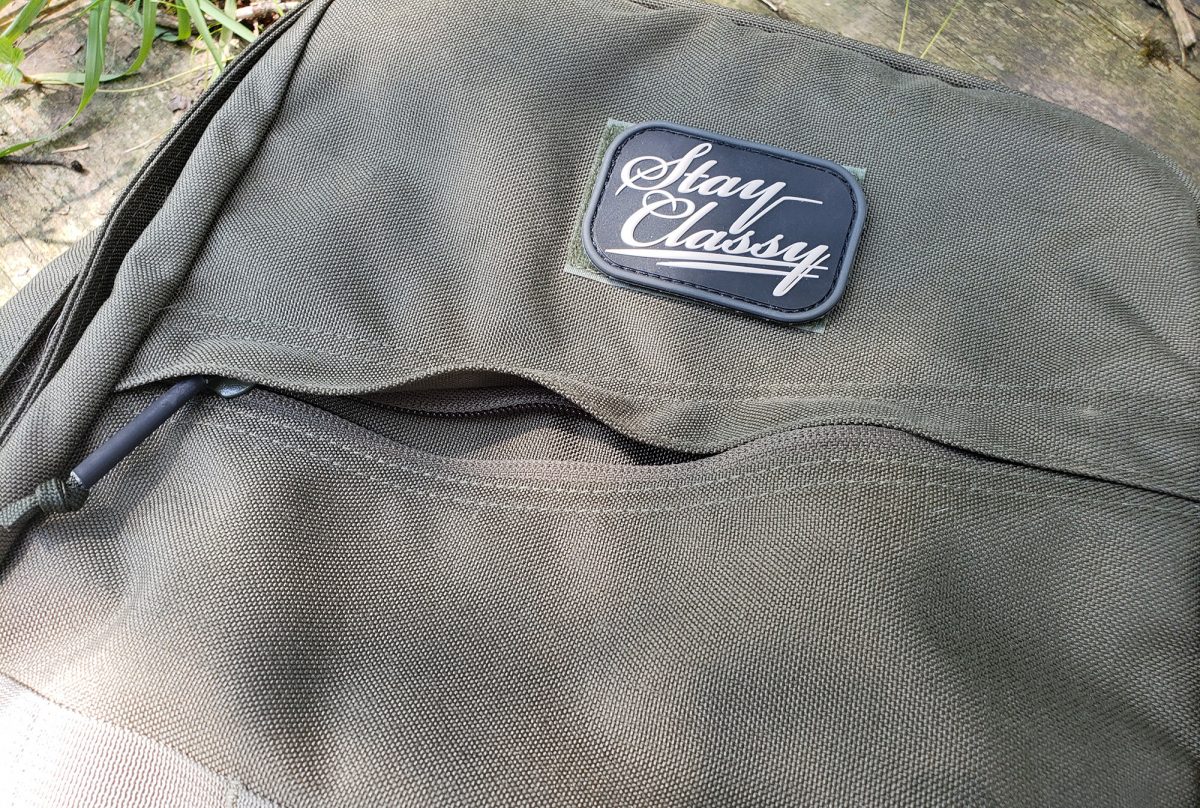 Next up on the back of the bag is the GR2’s “bombproof” laptop compartment. This compartment has extra reinforcement from every side including a “false bottom”, so when you drop the bag nothing can get damaged.

One nice thing about this laptop compartment is the zipper goes halfway down the side of the compartment as well as all the way across the top which makes accessing your laptop much easier than just a top opening, as most bags have. 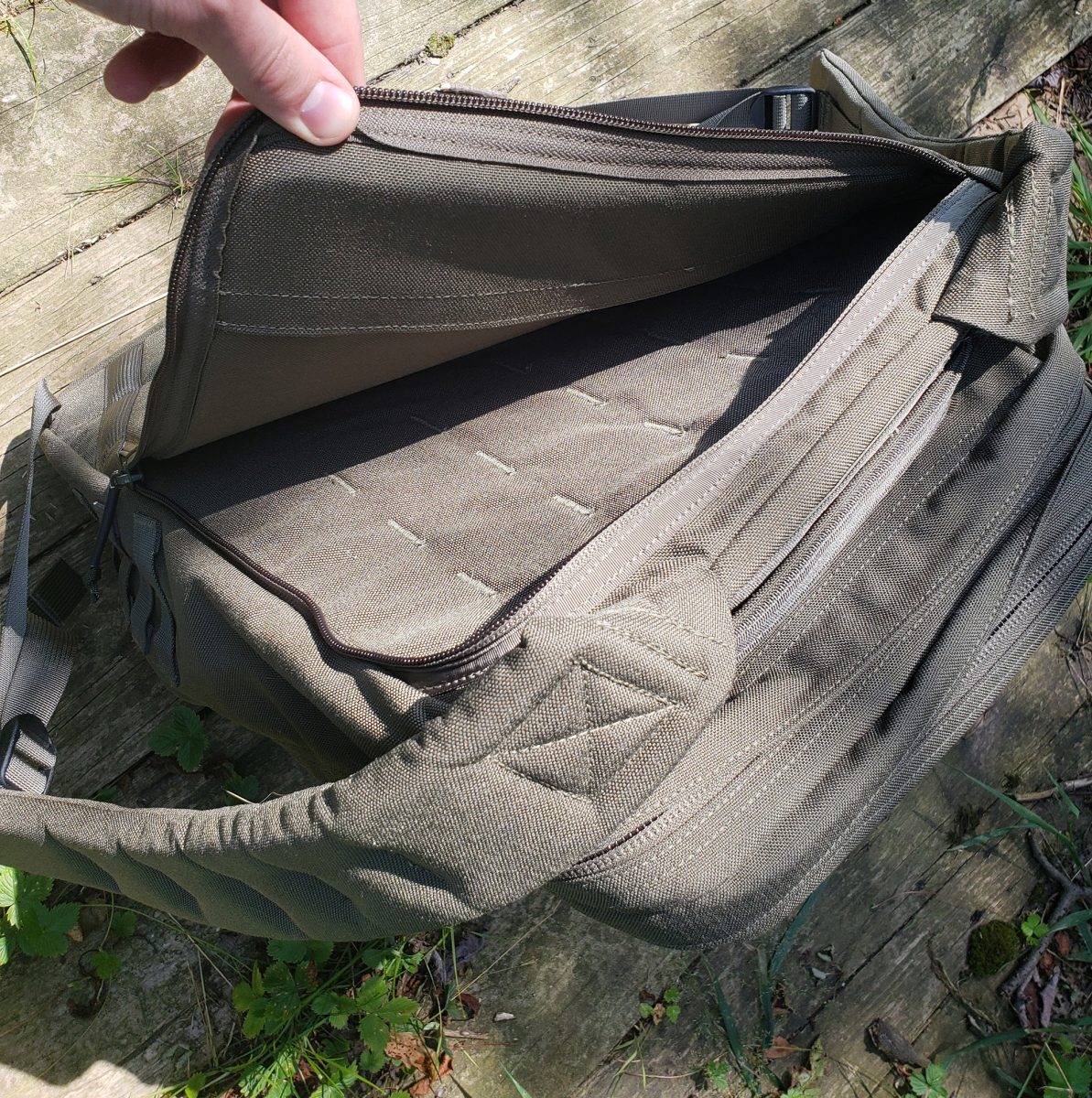 The GR2 has an outer compartment that opens up flat with a clamshell design which is the best design when it comes to packing as it gives you easy access to rearrange things as needed or access items stored anywhere within the bag without having to remove everything (assuming you have room to fully unzip it). 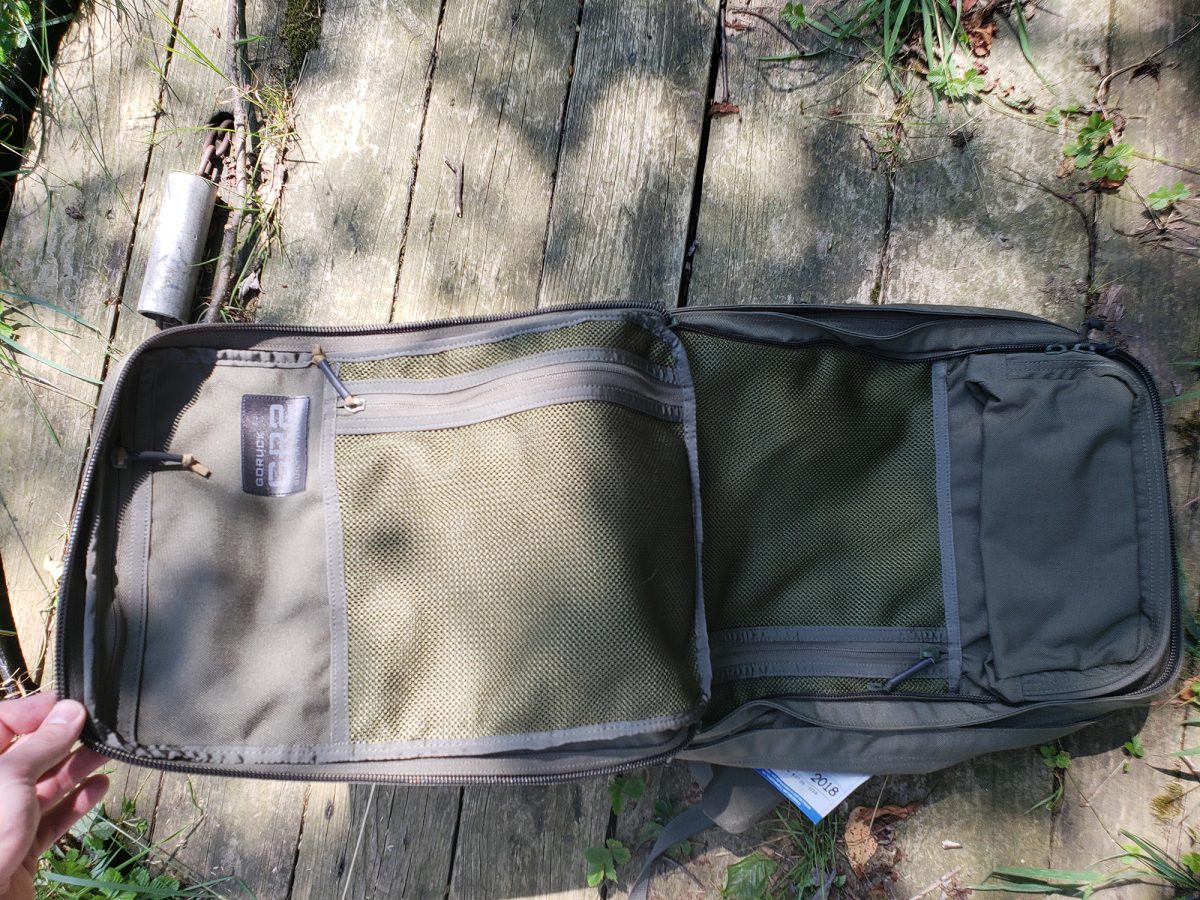 You can see a variety of different mesh storage areas within the bag as well as the “field pocket” which sits all the way to the right in the photo above. Inside that compartment is another set of mesh pockets as seen below. 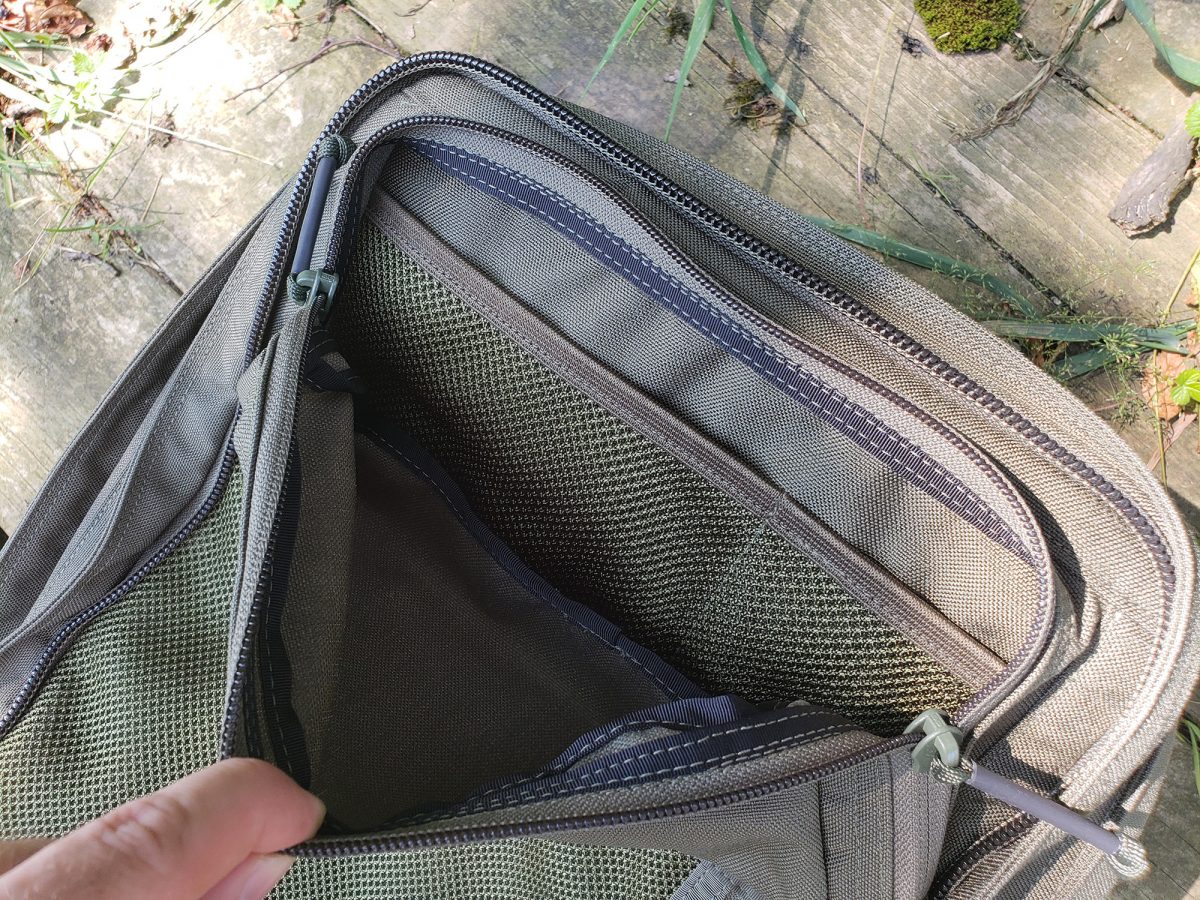 Last but not least we have the main compartment. Here is where most of the bag’s 34L capacity sits, as you can see it’s quite deep.

More mesh zipper pockets await as well as molle attachments, and a compression pocket which could be good for stowing shoes, other electronics, etc. 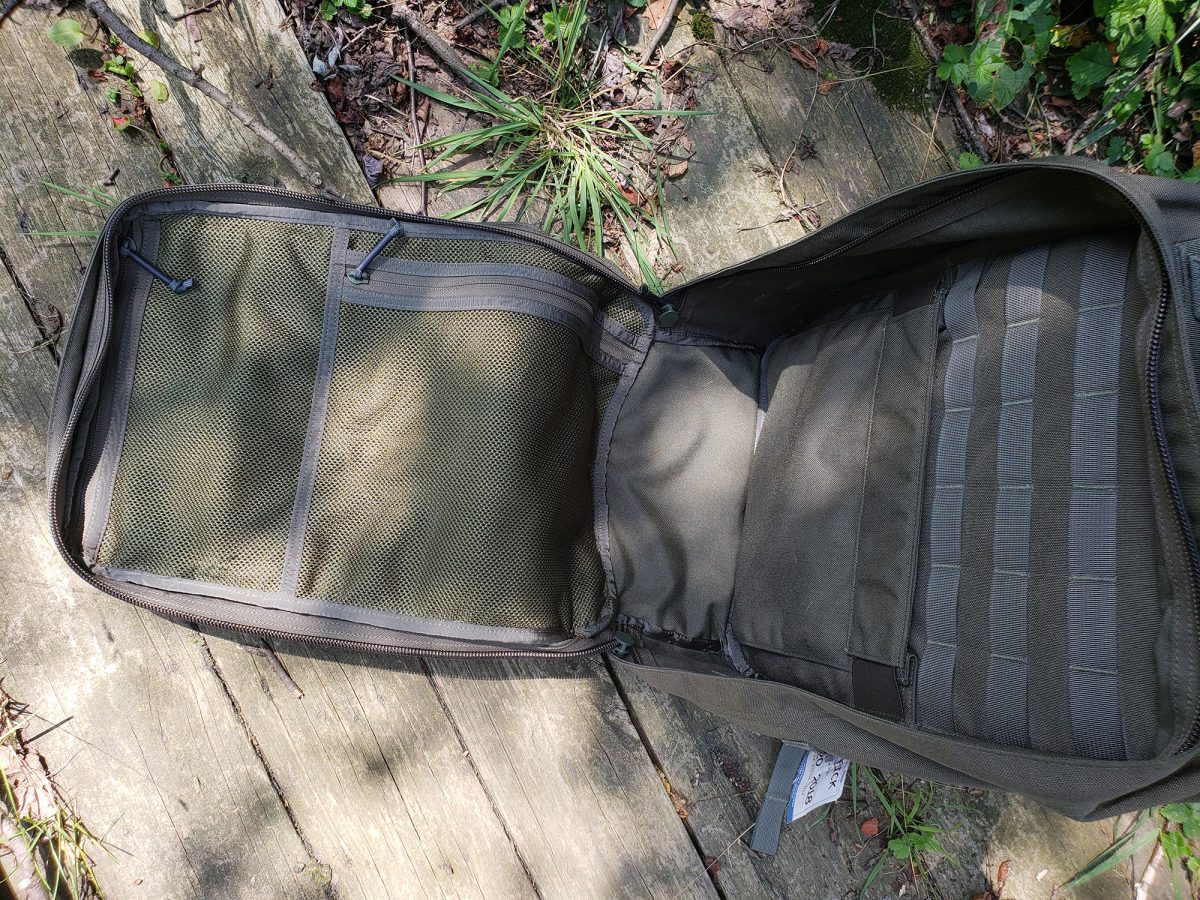 The GORUCK GR2 is a bad ass bag.  It’s unapologetically American. From the burly nylon it’s made from to the military roots, this bag is a statement piece. When Jason McCarthy set out to create a bag that could be used in Baghdad and New York City, by military and civilian, I think he nailed that itch that so many were dying to scratch.

So do I recommend the GR2? Absolutely… except to those who obviously aren’t a good fit. I think those people would be –

Otherwise if you got the money and like the style, pull the trigger on the GR2. You won’t be let down. 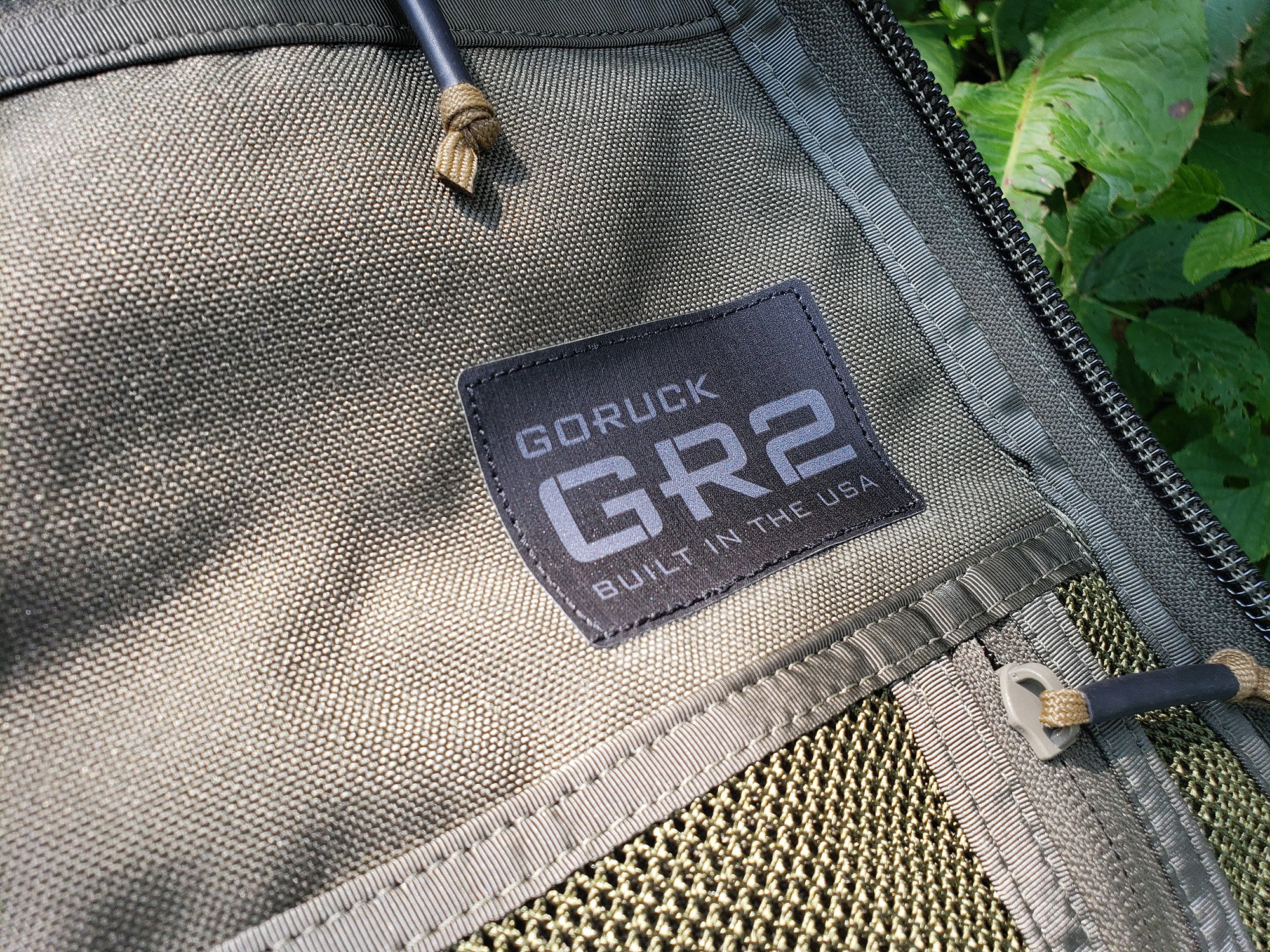 The Best Fanny Packs for Travel in 2019